Only eight years old, HELENA ZENGEL’ s  favourite pastime actvity – among numerous hobbies such as figure skating or horseback riding – is acting. She started in 2013 at the age of five with a role in a music video for the band ABBY, continued with the crime series “Spreewaldkrimi”, “Die Spezialisten – Im Namen der Opfer” and the film “Es wird Tote geben” – Helena seems to have a predilection for crime stories. She also likes to support tomorrow’s directors, so she acted in student films of all renowned German film universities: HFF in Munich, Filmuniversität Babelsberg KONRAD WOLF, Deutsche Film- und Fernsehakademie Berlin, and last but not least her first leading role with the drama DARK BLUE GIRL for the Filmakademie Baden-Württemberg.

Kiera Bahl from the agency Mittekind in Berlin represents Helena.

Karsten Antonio Mielke, born in 1977 in Recife, Brasil, grew up in the federal state of Germany Schleswig-Holstein and gained his first acting experiences at the age of ten with the German Red Cross (DRK). After travelling through Europe he moved to Berlin in his early twenties. There, amongst other things, he took acting lessons from Larry Moss, Giles Foreman and Mike Bernardin. He played in film productions like “Sunny Hill”, “Distanz” and “Die Fremde”. He also starred as Danny in the English-language play “Danny and the Deep Blue Sea”. In Mascha Schilinski’s DARK BLUE GIRL he plays the male lead JIMMY. 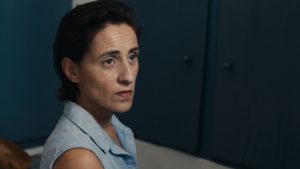 Artemis Chalkidou was born in Aschaffenburg to Greek/Cyprian parents and grew up in a Hessian village near Frankfurt/Main. Together with three siblings she helped out at her parents’ restaurant and – in a broad sense- gained her first acting experiences there. After secondary school she moved to Berlin in 1991, travelled Asia and South America and then began to study Pantomime and worked part-time as a geriatric nurse. She started to train as an actor in 1993 at Otto-Falckenberg-Schule in Munich. Since 1995 she’s had engagements at different theatres in Germany, for example at Münchner Kammerspiele (Munich), Schauspielhaus Hamburg (Hamburg), Schauspiel Köln (Cologne), Volksbühne am Rosa-Luxemburg-Platz (Berlin) and Centraltheater (Leipzig).

She plays in productions for film and television and works as voice-over artist and dubber. Artemis Chalkidou lives in Berlin and has two sons.