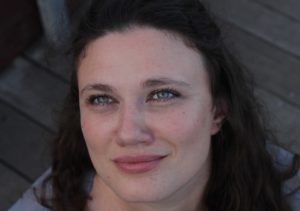 DARK BLUE GIRL has two roots. In late summer last year I sat on the terrace of a Berlin-Kreuzberg restaurant and observed the following: A three-year-old boy is rolling around a metal pole with his Bobby Car, bored, whiningly trying to get his parents’ attention who are having a lively conversation with friends. Angry about his parents’ dismissal, the boy starts to bump his Bobby Car against the pole, harder and harder. His parents, laughing in conversation, pay no attention to him. In raging anger the boy throws himself on the ground, kicking the Bobby Car. It falls over. He starts crying loudly. Now the parents react. The mother gets up, walks over to her son, squats down beside him and asks about what happened. The boy points at the metal pole and rubs his head. The mother blows empathically on his forehead while the whole table is watching – everyone whispers something comforting to him. The mother then takes the child back to the table and he looks right at me over his mother’s shoulder. I could’ve sworn to have seen him smile. He got all the attention he wanted, although nothing had actually happened.
Another key moment for this film was a situation Fabian Gamper (camera) and I came across when we travelled to Liguria in preparation for another film.
When we sat in the sun outside an ice cream parlour in Albenga, a man in his early fifties walked out of the shop, his arm around an attractive woman in her early twenties. They enjoyed their ice creams, and the man laughed delightedly when the woman tried to lick his ice cream. The enormous age difference was noticeable, but the two looked like a happy enamoured German couple, enjoying their holidays together. That’s when another woman, about the man’s age, walked out of the parlour. She stopped in the shade of the sunblind and watched the couple flirt in the sun. Fine lines around her eyes – laughter lines that made her so soft and beautiful – her glance was so calm and of such deep sorrow that it touched me deep down. The young woman turned around towards the ice cream parlour and shouted: “Mum, which way is it?”
In a line of three they walked down the alley: The mother to the left, about a meter away from her husband, who was in the middle – walking with the daughter in his arms. Mother, father, child. But it looked like wife, husband and mistress.

When does the reversal of roles start within a family?
Why are parents suddenly scared of their children?

In DARK BLUE GIRL, I want to show a reality different to the general assumption that children want their parents to be together. The relationship to their child is the only steady connection for Hannah and Jimmy – a relationship that outlasts every romantic relationship. Due to her special role in the family set-up, Luca’s parents give an importance to her that vests the little girl with power. And just like the boy on the Bobby Car, Luca uses her power to get her will. The seven-year-old is willing to carry to the limit: To secure her identity as the queen on her father’s side and to remain the connecting link, the centre of it all, Luca develops into a master of manipulation.