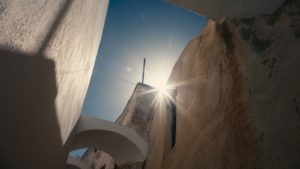 When JIMMY and HANNAH finally find a buyer for their holiday home on the Greek volcano island Santorini, the ex-couple returns to the place where they broke up two years ago. In tow: Their seven-year-old daughter LUCA whose love the parents compete for. Hardly arrived on the island, old tensions and conflicts appear despite every effort to make it right. Above it all is Hannah, who is jealous of the close father-daughter-relationship she is not able to reach. But the upcoming sale of the house triggers something in Jimmy as well – the irrefutable end of his former dream: to have a future as a family.

Ripped out of the daily life in Berlin, something unexpected happens: Hannah and Jimmy fall in love again. Carefully, they start a new try as a couple.
Of all things it’s their daughter Luca who risks everything to prevent this from happening.

Luca reacts with jealousy to the unusual situa on and feels like she’s being pushed o of the throne. To Luca, her own mother turns into a rival that wants to steal her daddy.

Within the scenery of an idyllic island, a profoundly evil power struggle for the family crown develops. Frighteningly calculative, Luca pursues her target to sabotage the reunion of her parents. In shock, Jimmy and Hannah realise how deep the perfidious role reversal has been stalled in their family system over the years: Luca is the queen on her fathers side and not ready to give up her position as the secret head of the family. With childish cleverness, Luca plays o both her mother and father and exposes her parents as needy children, at the mercy of their own daughter.